“Jon, did you know?” a friend asked me today. “There’s now Eurostar Brussels to Amsterdam and it’s cheaper than the Thalys!”

As a rail nerd I did of course know it exists but I have not had the chance to take it yet. But that gave me the idea for a little test – how easily could a regular traveller find tickets for Eurostar between Brussels and Amsterdam, and compare those with Thalys and the slower InterCity service that connects the two cities? On a weekday there are roughly 3 Eurostar services, 14 Thalys services, and 16 InterCity services – all direct – between the two cities.

For this test I checked for outward Brussels Midi – Amsterdam Centraal tickets from 0900 on 17 February (just over a month from now), returning the following day after 1200. I tested three websites of incumbent rail firms – SNCB’s B-International, NS’s NS International, and SNCF’s oui.sncf but the Belgian version be.oui.sncf. For comparison I added Eurostar’s own site eurostar.com, the overseas booking portal of SNCF Rail Europe (was formally Loco2), the rail booking site thetrainline.com, and the multi-modal platform omio. 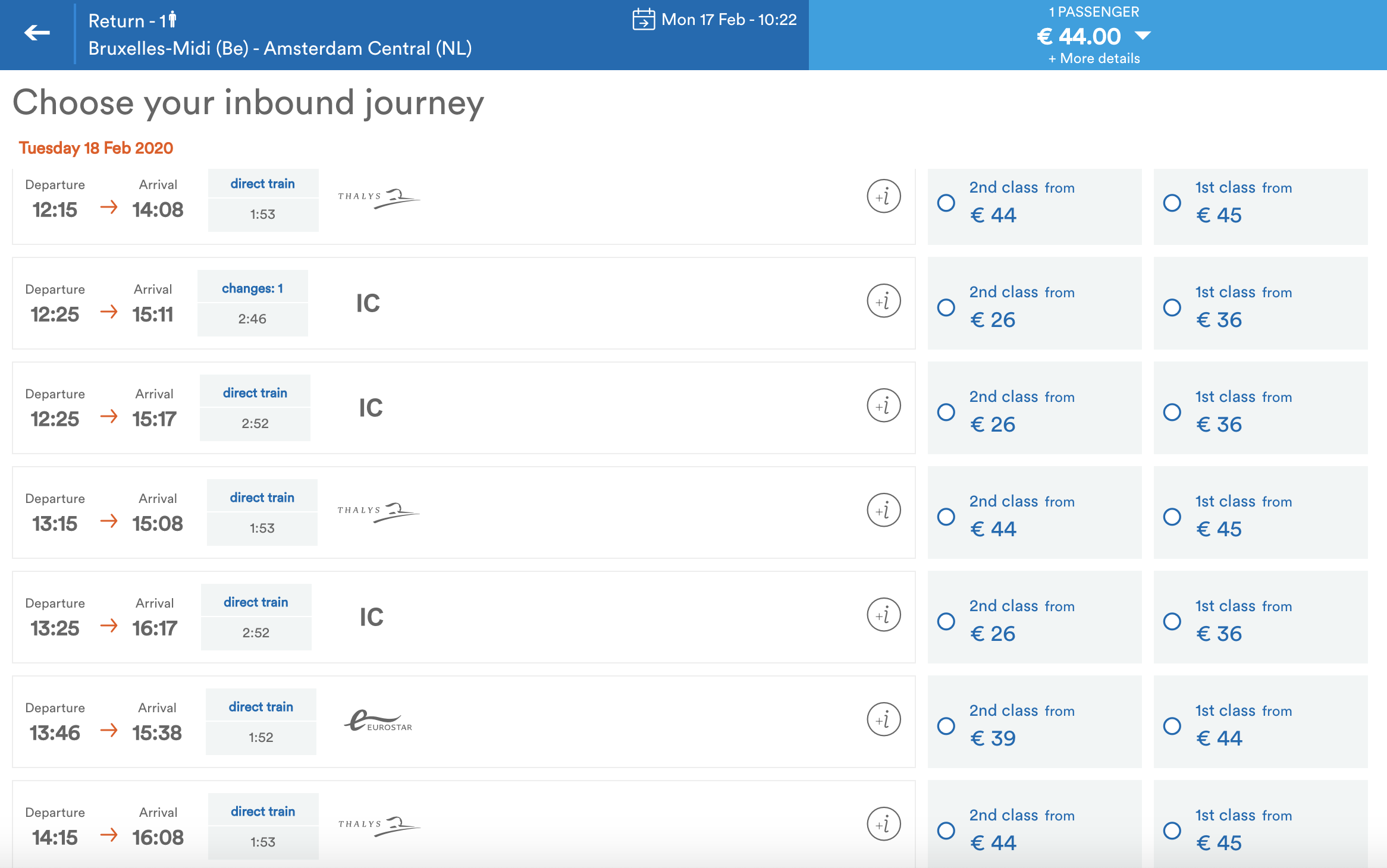 Trains with connections as well 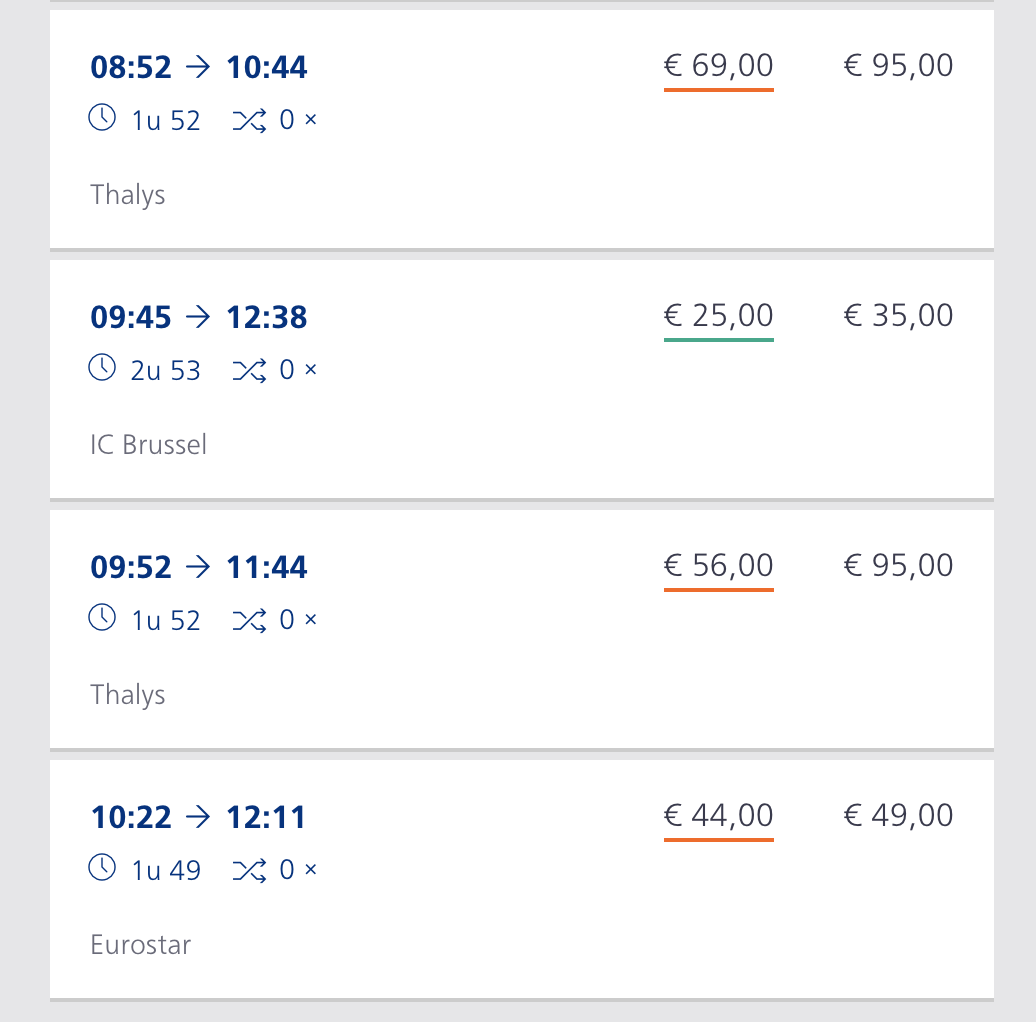 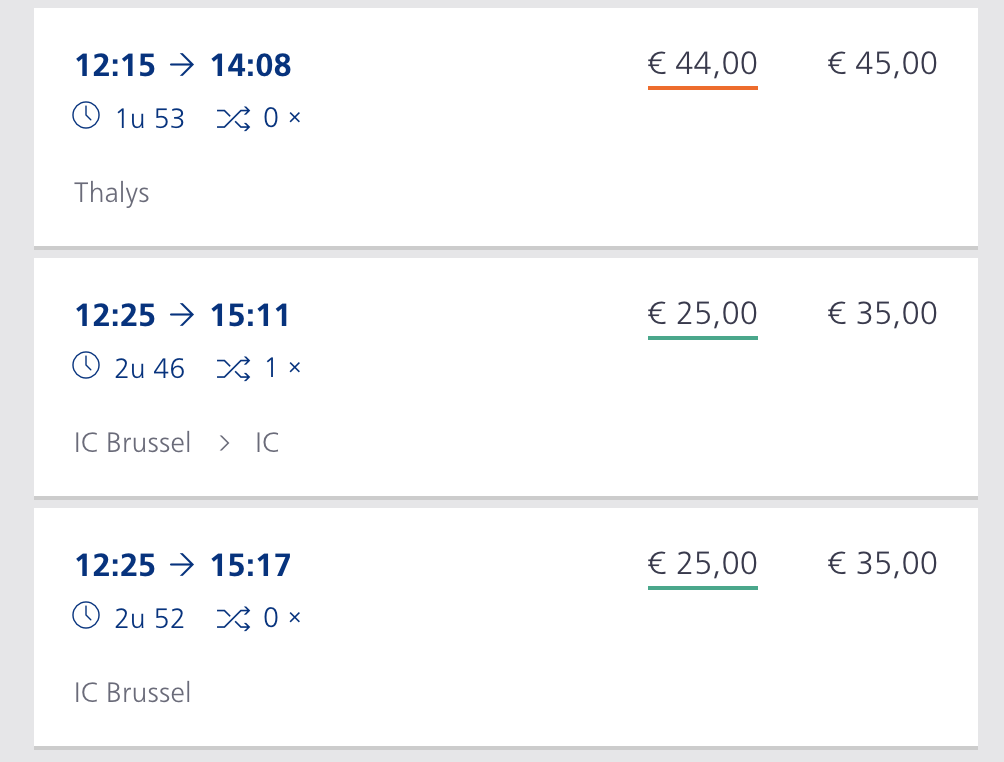 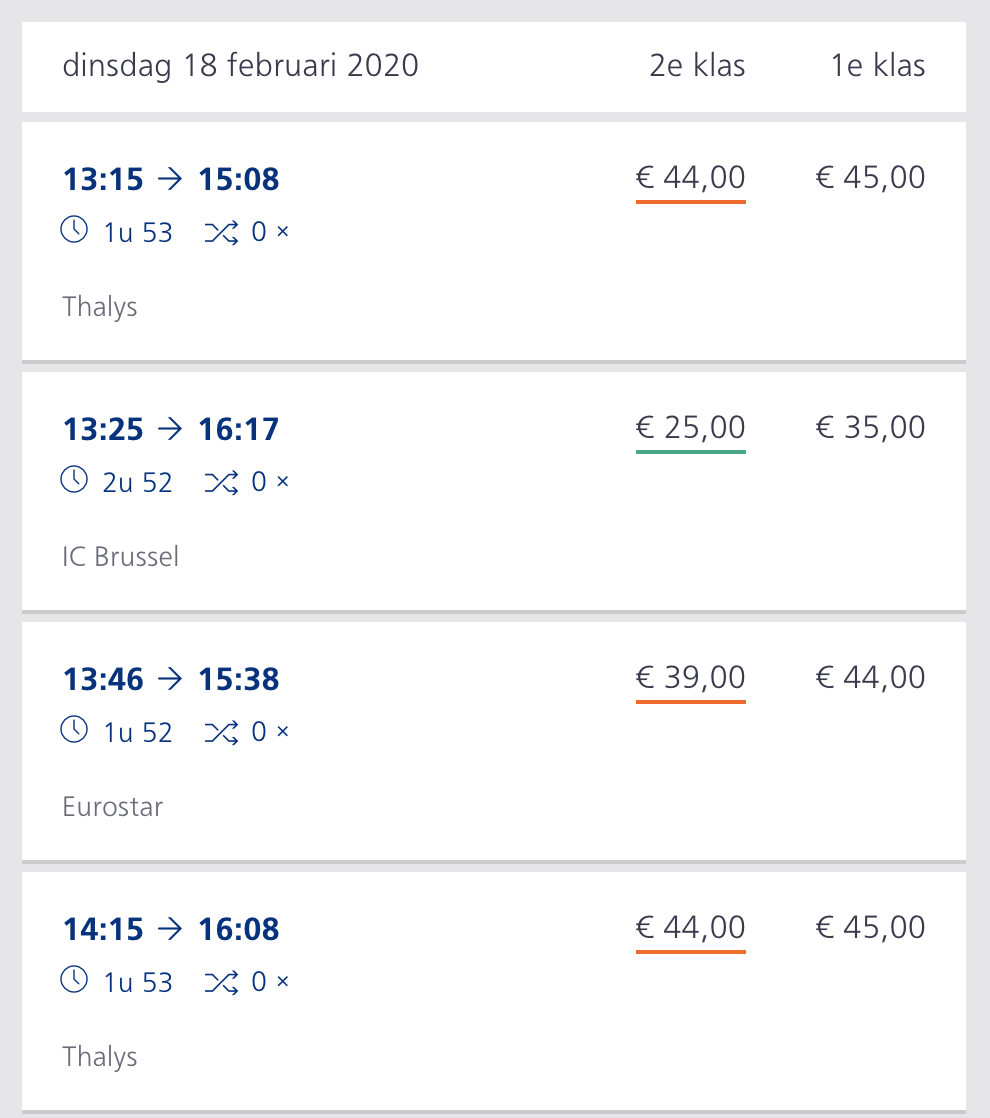 Gives some trains with connections as well 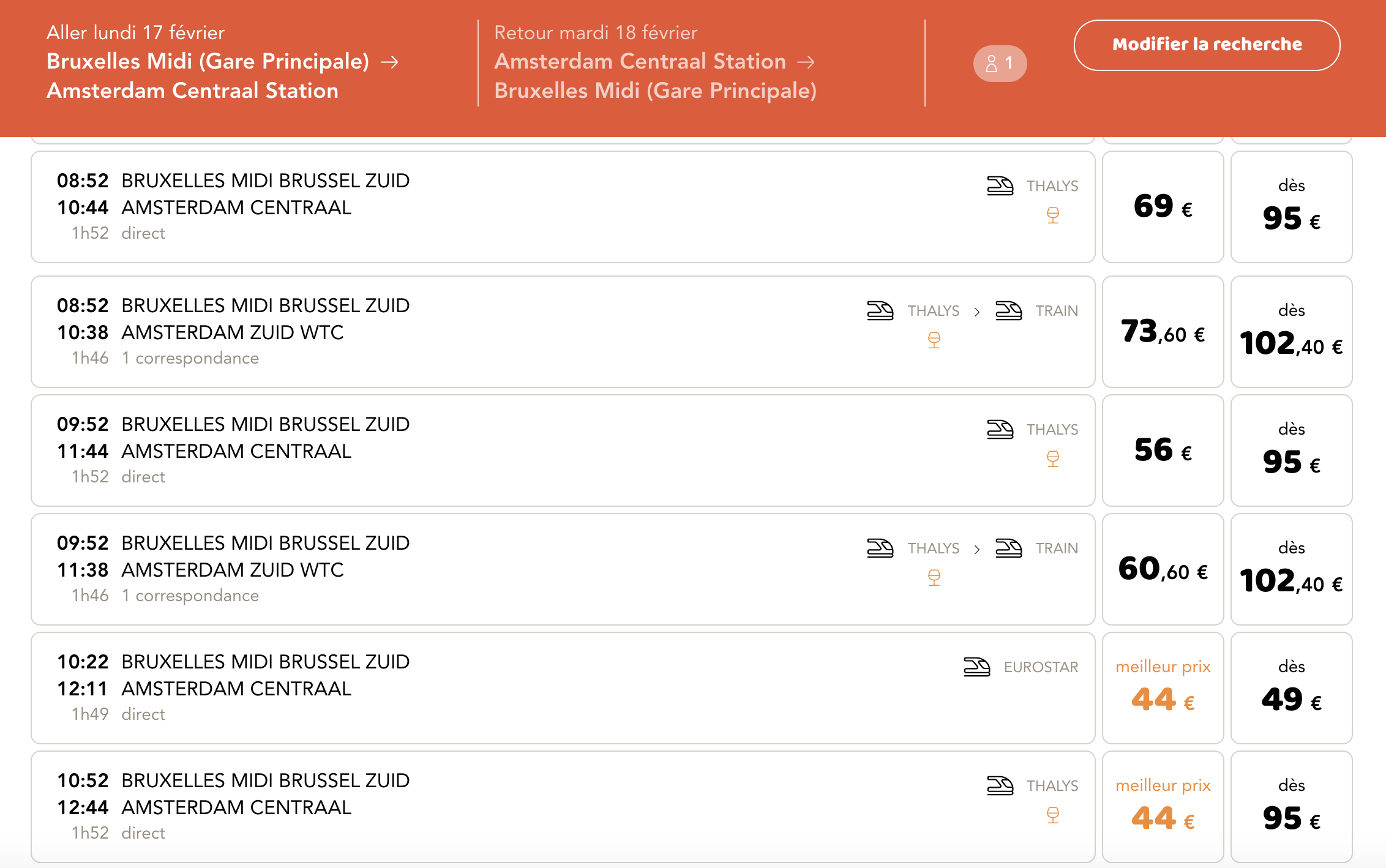 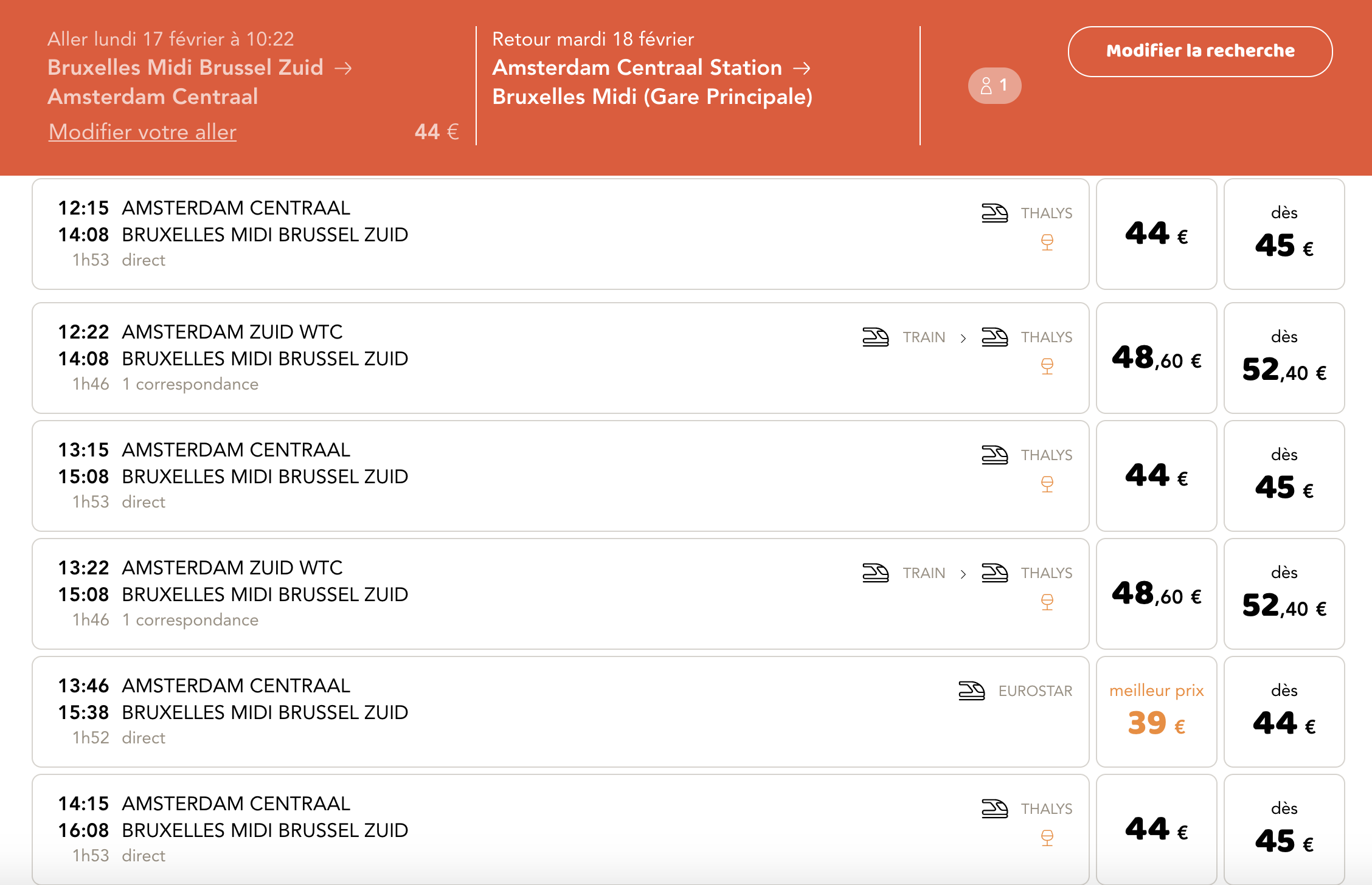 Only Eurostar and Thalys shown. InterCity trains not shown

(it also indicates with a

that there’s a bar/restaurant on board… but there is on Eurostar too, that doesn’t have that icon!) 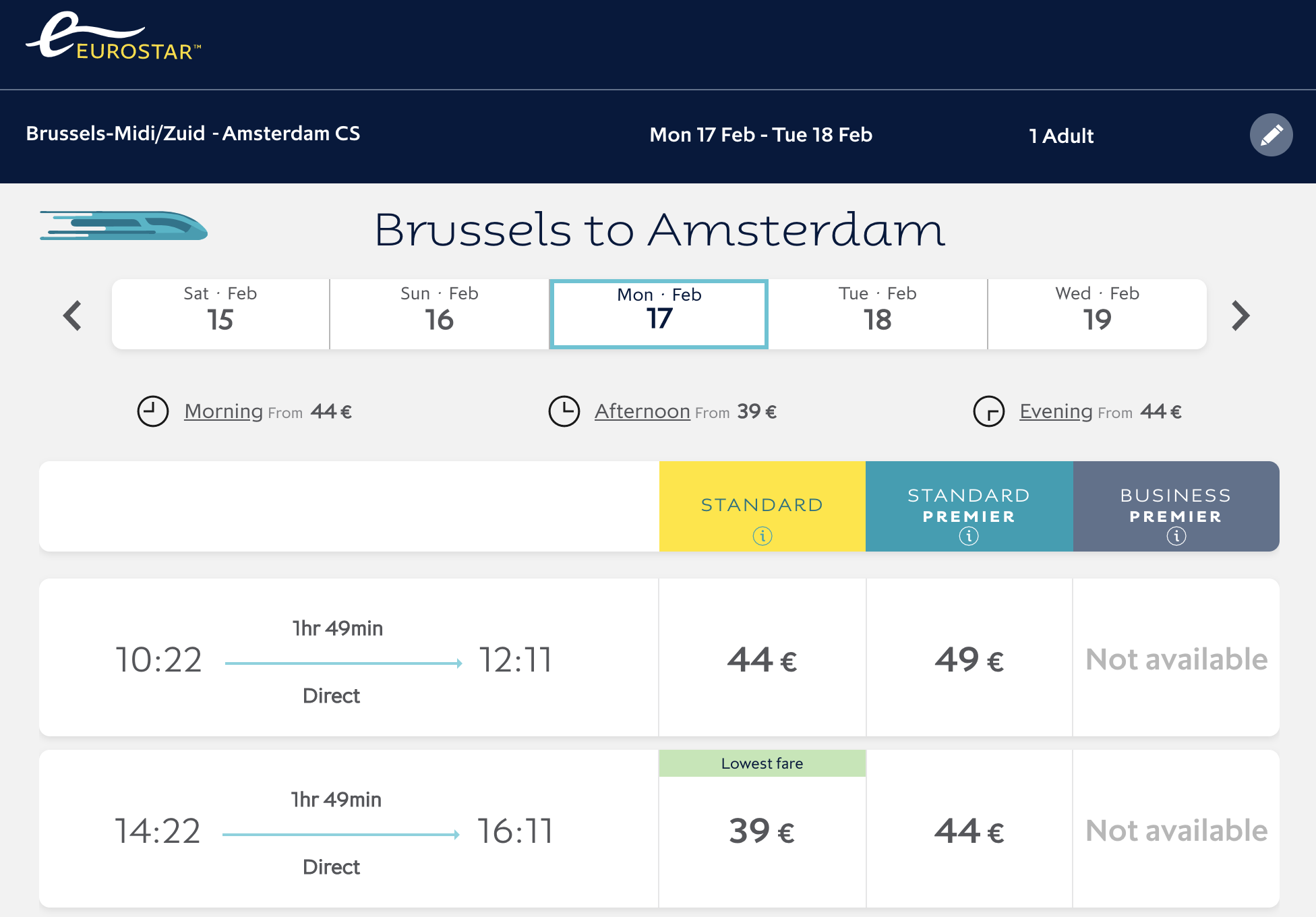 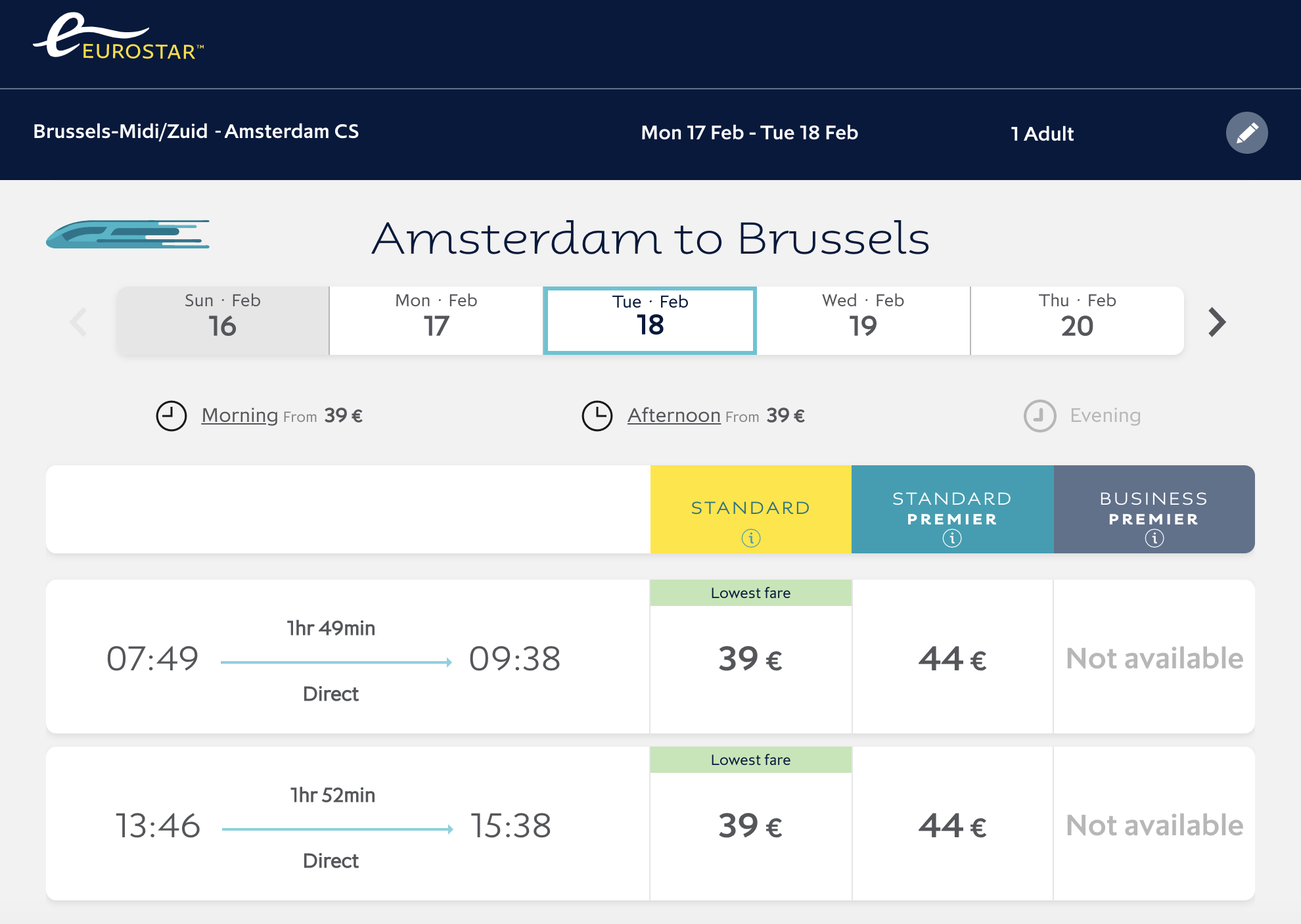 Only Eurostar shown. Thalys and InterCity trains not shown (for comparison – Thalys website does not show Eurostar either)

No trains with connections shown 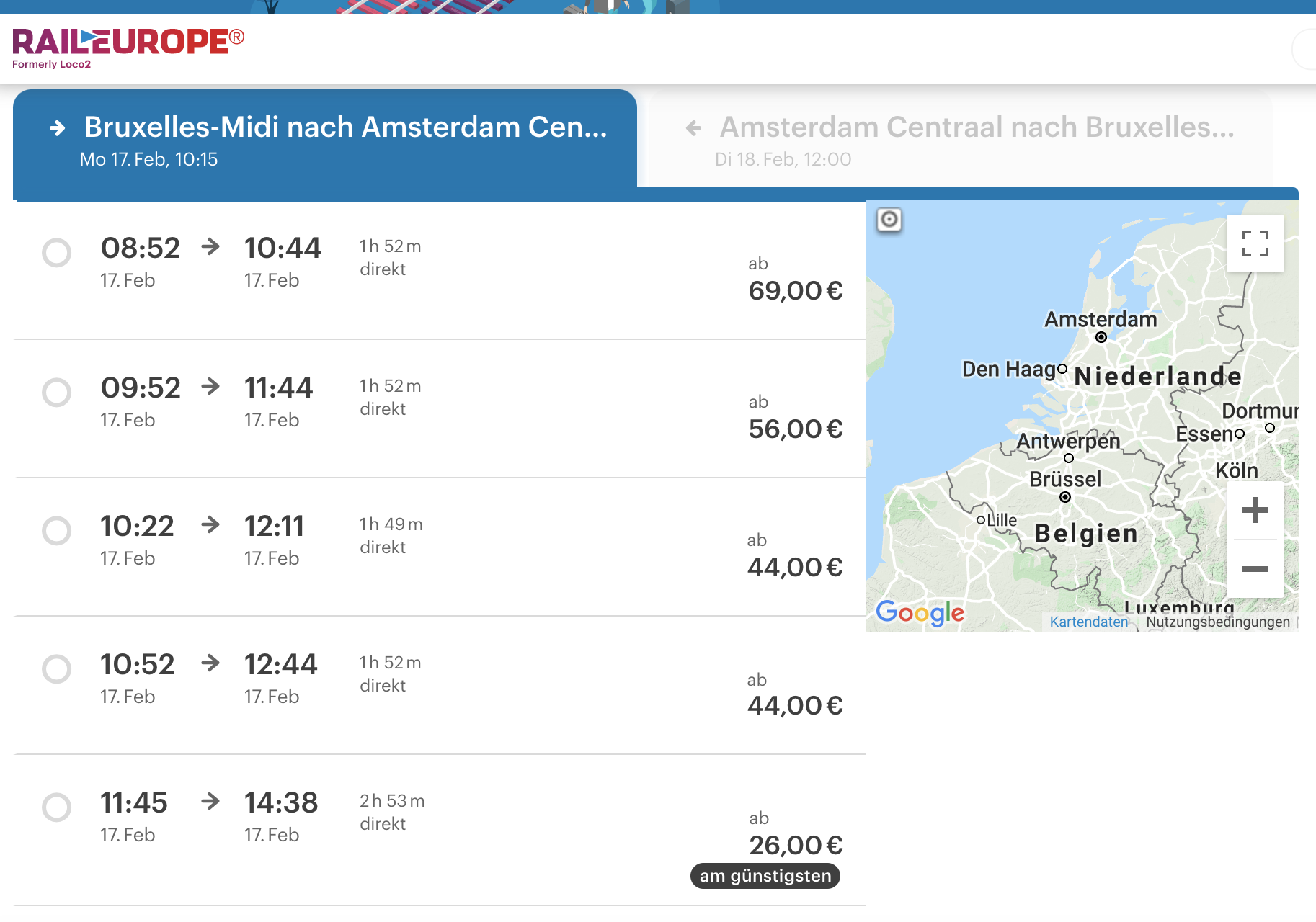 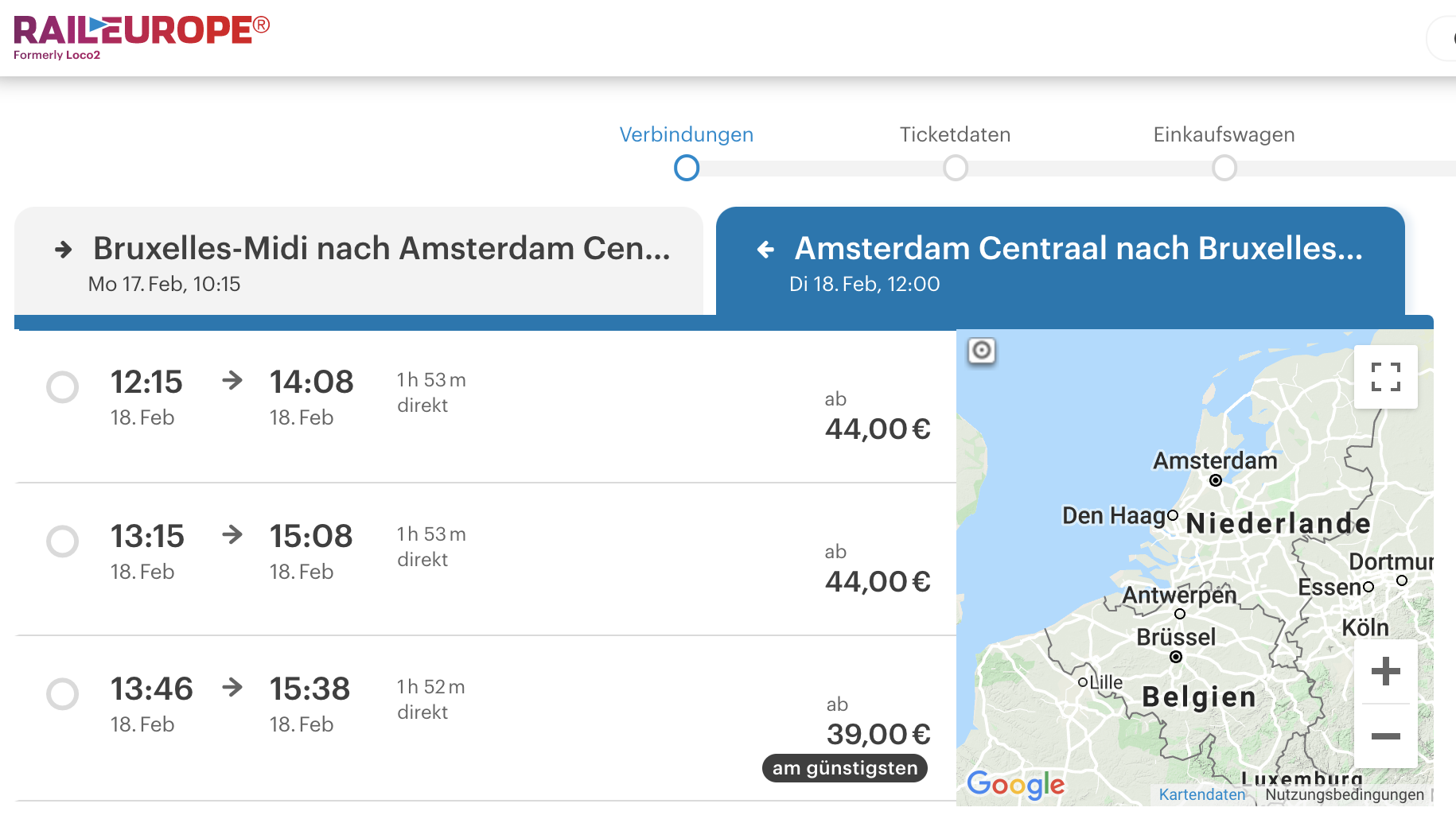 Eurostar, Thalys and InterCity trains shown – but with a major catch! The 0945 Brussels-Amsterdam InterCity train is not shown (presumably because there is a 0952 departure that is quicker), but that 0945 service is half the price! While the 1145 InterCity – against which there is no competing faster service – is shown. I do not know if this is through outright malevolence, or by design, but the customer should choose here!

No trains with connections shown 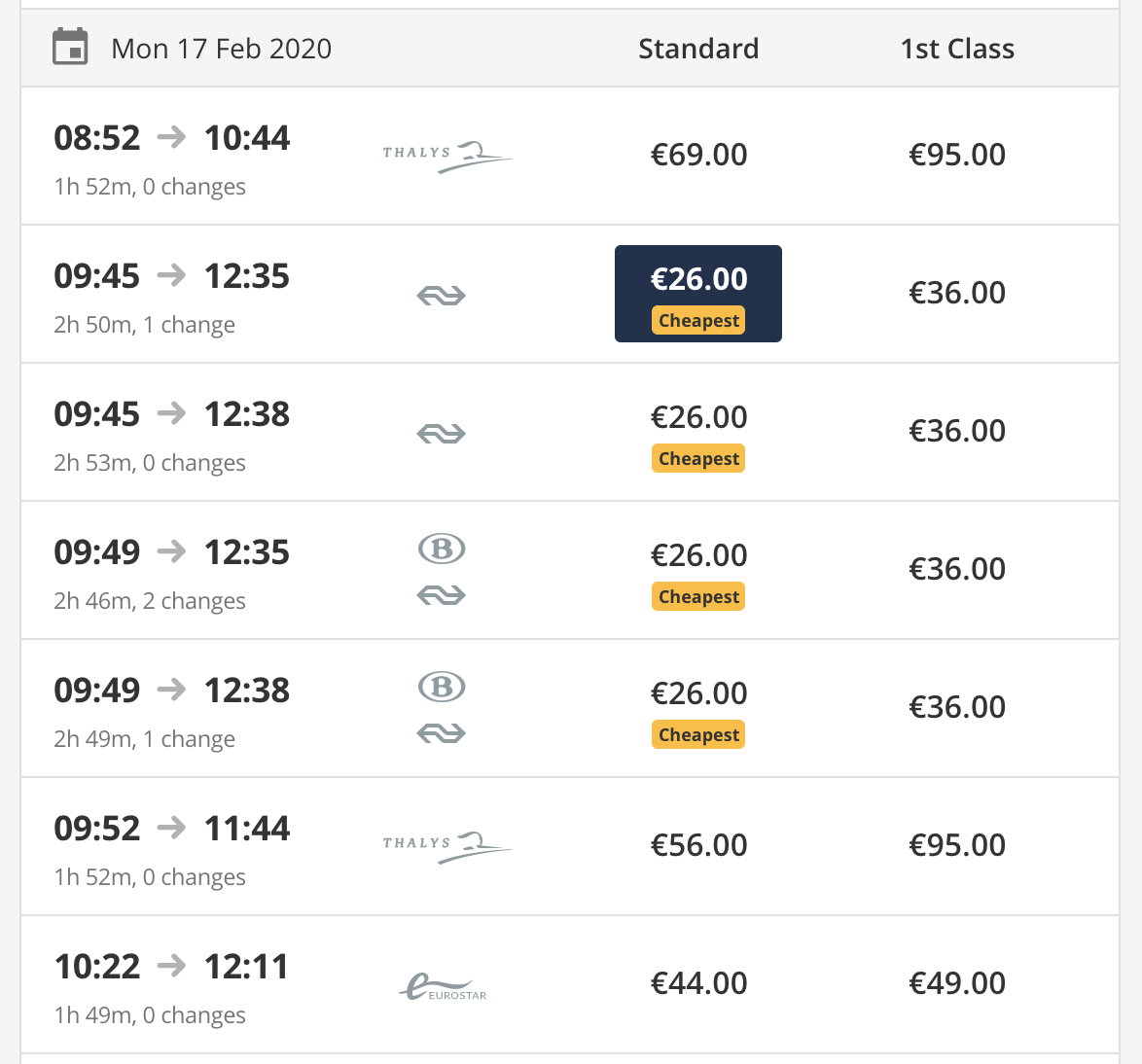 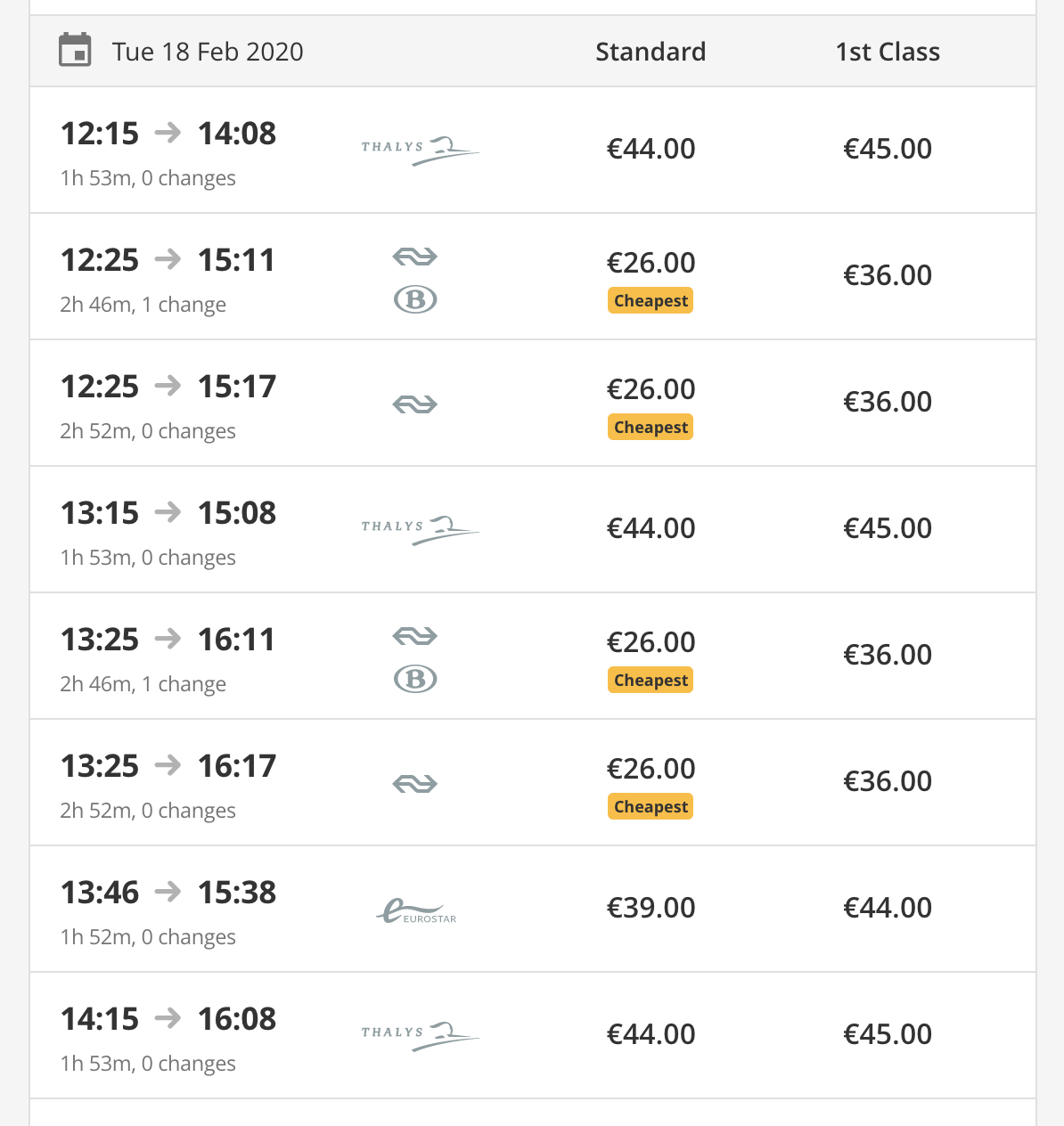 Only InterCity and Thalys shown. Eurostar not shown.

Impossible to tell whether trains with connections are in there

On this test, thetrainline.com is the best, closely followed by NS International. B-International’s performance is also fine – you just need one more click for a full price overview.

The other sites perform awfully. oui.sncf does not show InterCity trains. Eurostar shows only its own trains. omio does not show Eurostar trains, and has an interface so bad it is next to unusable.

But special disdain is reserved for Raileurope – they clearly have all the data available, but for some reason eliminate one cheap and appropriate departure. That’s really bad.

So it’s simple then…?

But as my equivalent experiment last month (for a Bruges – Aix-en-Provence trip) showed, there oui.sncf was the only site to actually list all the available trains…

The sad conclusion here: there is no booking website that does an adequate job even for cross-border routes from Belgium to its neighbouring countries. That there would be an adequate site for the whole of Western Europe, let alone the whole of the EU or the whole of Europe, remains a pipe dream.

The post How to book Brussels-Amsterdam rail tickets – a further example of the absurdity of cross border rail in the EU appeared first on Jon Worth Euroblog.