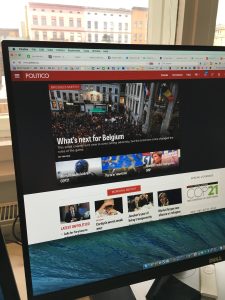 It is now 7 months since the US publication launched its European operation. Enough time to reflect on what does, and does not, work with it. In this blog entry I am going to try to give a fair and balanced view of the publication so far. I have canvassed views on my personal Facebook profile, through Twitter (original tweet here), and some people have emailed me in confidence, and this blog entry draws on that. I have no access to any aspect of Politico PRO (I am too poor to have cash to subscribe), so this covers what is available for free on the Politico Europe website, free by e-mail, and in the printed edition.

Who is it for?
From the outset this question has perplexed me. Is Politico Europe a publication about EU policy? Is it about everyday European Union politics? Is it about connecting the politics of national capitals? Is it to take EU politics to a wider audience than ever before? Or a combination of all of these? Its predecessor, European Voice (EV), had a heavy EU policy focus, something that Politico Europe – in its free, public parts at least – rather lacks. As one Brussels sage said to me, “It’s taking the Brussels bubble for granted” and I cannot disagree with that. Now that might of course be a good thing – EV was often dry and very narrow, so something broader could actually be beneficial. But armed with European Voice’s database as the backbone for its e-mail newsletters, it is building from Brussels outwards, and it should not be complacent as it’s the only show in town. EUObserver and Euractiv may be under pressure, but they are not out. Mark Rhinard calls Politico Europe “airy and empty” (tweet here), and Jonathan Millins calls it “an elitist tabloid” (tweet here) – is that the aim? If so, who is the audience?

Is it good journalism?
Building on the point about its audiences, there is a general consensus among the people that I have spoken to (and this reflects my own view) that in terms of style, Politico Europe is a step forward in comparison to EV, and is a cut above the other dedicated EU news sites. EU institution people, lobbyists, and even a few journalist friends from other outlets, describe it in positive terms when it comes to how it is written. Refreshing and digestible.

However – and this is by far the most common criticism – it is littered with factual errors, and questionable choices of words to describe complicated procedures. “They have enough journalists – can’t they employ some fact checkers?” one Brussels journalist not employed by Politico said to me, and that is a very fair critique in my view. For example this piece on Schengen is so poorly worded it made me wince, and the words (in this) “the Commission, a parallel but larger institution that sits across from the Council” are awful for an EU publication. That lack of real depth to the reporting, and the lack of genuine investigative journalism, are also fair criticisms – although after all Politico has to survive, financially, so the bar here cannot be set too high.

The headlines of stories are often sexed up into clickbait, and then the article that comes afterwards then says rather little that is new. “You have the feeling you read it somewhere else already” a friend remarked to me. “The In crowd to Commission: Back off!” is a case in point – the title is exaggerated, and the piece basically turns one line in a Commission report into a story, when nervousness about the EU institutions’ role in the UK referendum is nothing new. The title of this blog entry is of course written with Politico in mind – be glad I don’t sex up all the titles of all my blog entries!

I am also aware that there is fear inside the European Commission at how Politico journalists operate – officials have at times been clear when speaking at events that they are expressing a personal view, not an official view, and this then appears in Politico the following day as an exclusive. This means Commission officials are – more than before – just going to refer journalists to a spokesperson for a bland official line instead. This will make the Commission more paranoid, and mean Politico is in danger of losing valuable sources – that is no good for either side.

Is it biased?
The answer to this is yes – it leans right. I do not think that unbiased reporting is possible, but that the sort of media of record of the Brussels bubble now is more obviously ideological than EV means there is now a problem of balance. Progressives I know dislike its political line, while some right wingers I know very much welcome it. Its coverage of the Greece bailout crisis, and formation of the left wing governent in Portugal, were I suppose typical of a publication that is backed by Axel Springer. It also seems that personal experience – on Brussels taxis versus Uber for example – has a disproportionate impact on editorial choices at Politico Europe. I don’t blame Politico for this bias (it’s their editorial call), but let’s get away from the idea that Politico Europe is somehow middle of the road, somehow objective – it is not.

Other things
The American spellings, and especially the American dates, are really annoying. English, and not English with errors (as @Queen_UK aptly put it on Twitter), is an official language of the European Union, so a major Brussels publication ought to write that way too. Some of the clichés about Europe give the impression Politico Europe is being written more for an American audience than for a European one.

There is general and widespread appreciation of Ryan Heath’s Playbook – no one expressed a negative view about it to me. It seems to be a genuinely interesting addition to the EU media scene.

Politico journalists seem to be too in love with themselves, and with their publication, and do not react very kindly to critique. I was on the receiving end of it from Tunku Varadarajan, while Alice Stollmeyer has been on the receiving end this week from Matthew Karnitschnig and Matthew Kaminski for pointing out problems with their Energiewende reporting (Renewables International fisked Politico’s reporting here). In the early days, calling Le Soir “world’s biggest socialist student newspaper” was over the top – if you are a new publication in town, going out all guns blazing against other publications is perhaps a bad idea right at the start.

Conclusions
So there you have it. Politico Europe has changed the Brussels media landscape, for good and for bad. It has a refreshing style, but makes errors. It leans right, and uses annoying Americanisms and clickbait headlines. Its Playbook is widely appreciated. And in the meantime it still has not quite found a defined role.

Affiliations
I was commissioned to write one piece for Politico on 20 May 2015, for which I was paid. Politico has quoted things I have written elsewhere on its site. I count a number of Politico employees among my friends (some of whom are friends on Facebook and hence can see discussion prior to this story on my Facebook profile). I have no current business relationship with Politico.